The history of dry ice

What is dry ice? How did it start? When was it first discovered? Keep reading until the end of the article to find out!

Welcome back to Dispotech blog, your disposable excellence. Today, based on an article published on air-n-water.com, we talk about dry ice - one of our customers' most popular products.

What is dry ice? How did it start? When was it first discovered? Keep reading until the end of the article to find out!

In a nutshell, dry ice is the frozen form of carbon dioxide, which is exhaled by humans and is essential for plant life and health. Dry ice is very cold with an average temperature of -109.3 degrees Fahrenheit (about -625 degrees Celsius). Also, it is considered an “unusual solid” because it transforms directly into gas - not a liquid - during the sublimation process.

Most scientific authors have identified the French chemist Charles Thilorier as the first scientist to have discovered the dry ice phenomena. In 1835, the scientist was observing a metal cylinder containing a large quantity of liquid carbon dioxide, waiting for it to evaporate. Once it evaporated, there was a block of dry ice at the base of the cylinder. Prest Air Devices, which later became DryIce Corporation of America, was the first company to market dry ice in the United States of America: in 1925, the company built a factory which sold dry ice to the railways to keep train cars cool.

Dry ice has been used for many scientific and commercial  purposes - including the film and entertainment industry. For instance, it can be placed in hot water to simulate a fog effect!

However, it is mainly used in the medical and/or sports profession for traumas or to provide immediate relief following contusions or minor injuries. It is no coincidence that Dispotech dry ice is one of our most popular products!

Do you use it? Did you know how it is produced and when it was discovered? Have your say, by contacting Dispotech! 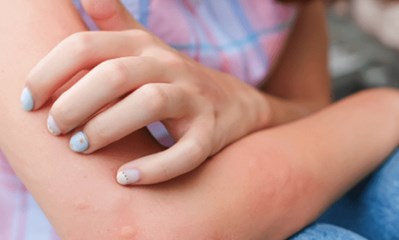 In today’s article published on the Dispotech blog, you will find some very useful tips with some quick and effective methods for treating insect bites. In summer, it’s not so uncommon to be stung, hence it’s best not to be caught out unprepared and to always be able to act quickly to speed up the healing process. The first chills, the one heralding the arrival of winter, are setting in and in this article we want to give you some practical advice to prevent annoying injuries that can cause you pain - or worse, keep you housebound to fully recover. the proposal of the UK and more specifically of the NHS (the country's national health system) to use recyclable PPE (Personal Protective Equipment) to reduce pollution. Why is water so important for the body

The importance of constant hydration and the necessary maintenance of water homeostasis in our bodies.